One of the great joys of traveling anywhere in the world is getting to know the street food culture in that place. This is food that you can get quickly and inexpensively in almost any city, though it’s not what I would call “fast food”: not mass-produced or pre-fabricated. You might get it from an open-air vendor or from an actual brick-and-mortar takeout place, but it’s always a quick and satisfying meal, and even the gussied-up restaurant versions of these dishes don’t get too far from their roots. 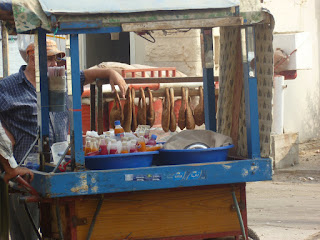 I’m not quite sure if I’d say that the modern US has its own street food culture beyond the hot dog cart, but we’ve been a fertile ground for street foods from around the world to find a place in our national appetite. You can probably find some version of tacos, fish and chips, gyros, or falafel in just about every city, in old-school street carts and diners, in massive corporate fast-food chains, in hipster food trucks. But it’s amazing to see the spread of certain kinds of food cultures. For years, the only type of ramen that most of us ever encountered was that styrofoam cup of noodles and dehydrated vegetables. When I was growing up, nobody around me really knew what shawarma was, but since the Avengers made a feast of it, it has definitely arrived.

So let’s start with shawarma. Somehow I had shawarma only once on this trip. That was definitely not enough.

It starts with the meat. Thin slices of marinated lamb are stacked on a vertical spit and roasted for hours. 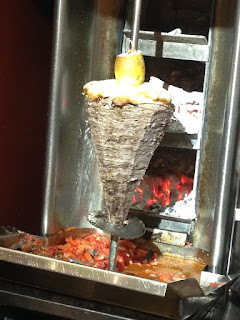 Then you cut off thin slices, and tuck them into pita with tomatoes, onions sprinkled with sumac, pickles, tahini sauce, and fresh parsley. 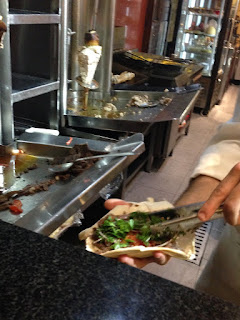 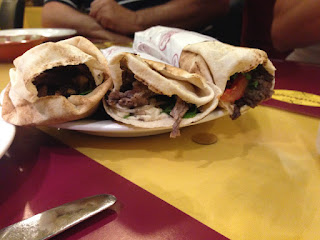 There’s also a version with roast chicken and lashings of toum, which literally just means “garlic.” It’s a creamy garlic sauce made of garlic, oil, salt, and sometimes a bit of lemon juice. You puree the garlic with the oil so that it emulsifies; it has a texture similar to mayonnaise but infinitely more potent and delicious. The chicken shawarma also frequently includes french fries, as this one does. (I don't think I've mentioned this yet, but French-fried potatoes are ubiquitous on Lebanese menus, whether in restaurants or in home kitchens.) 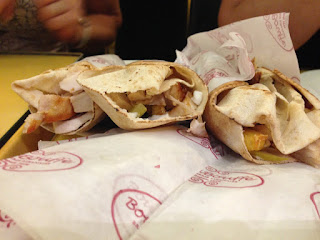 Fries in sandwiches are the greatest thing ever and if you’ve never tried it, you really should. One of the best sandwiches I’ve ever eaten was a shawarma-style wrap with fried eggplant and french fries and garlic sauce. Or a Lebanese-style hamburger: you can either use a plain beef patty or kafta (ground beef or lamb seasoned with parsley and minced onions), but pile some garlicky cabbage slaw and a handful of fries on top before you cap it off with the bun, and you will not be sorry. (My dressing for Lebanese-style coleslaw is olive oil, lemon juice, fresh garlic, salt & pepper, and just enough mayonnaise to make it creamy; for a small head of cabbage, maybe a tablespoon at most.)

You can make a pretty good approximation of shawarma in your home kitchen, even lacking one of those cool spit-roasting contraptions. You can marinate thinly sliced steak in the appropriate seasonings, panfry it, and serve it with all the garnishes to make your own sandwiches. It’s actually pretty easy to do if you’re cooking for a crowd, and you can even use bite-size pita pockets to make little shawarma sliders. 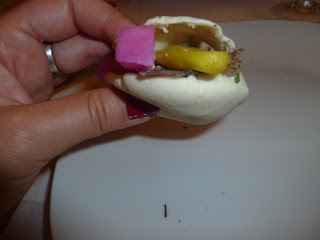 The kebab has a long and venerable street-food history, too, and has moved indoors to places like this one, across the street from a busy college campus, where you can choose your own kebab. Sandwich to go? Plate with rice and salad to stay? Endless possibilities! 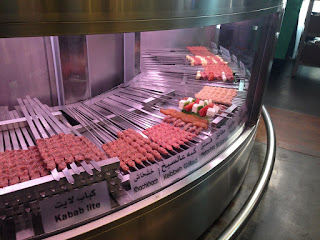 And let’s not forget that other great sandwich creation: falafel. You can find falafel on just about every street corner in every city, but my cousin took us to the one that he claimed was the best in town. 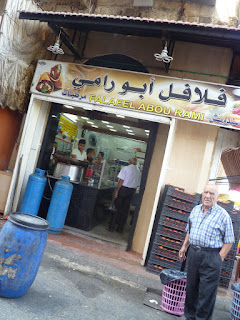 Falafel begins with whole dried fava beans and chickpeas, which are soaked for at least twenty-four hours, but not cooked. The rehydrated beans are ground and mixed with spices. The resulting dough looks like this: 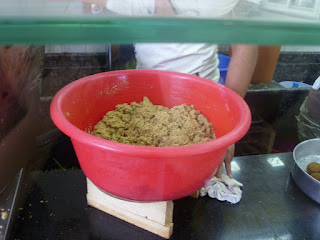 A lot of places pre-cook the falafel and then reheat it for sandwiches, but this joint cooks all of its falafel fresh to order. It comes straight out of the fryer into your sandwich. Add parsley, tomatoes, pickles, and plenty of tahini sauce. If you like it spicy, you can request it with hot chili sauce. 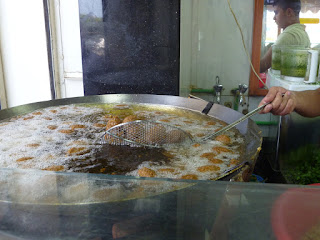 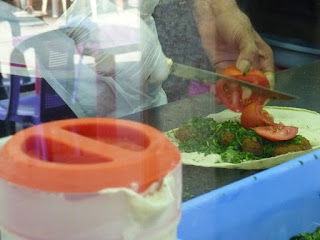 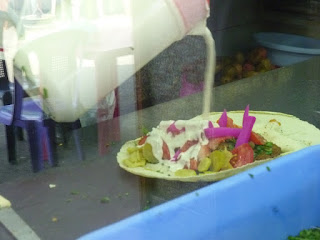 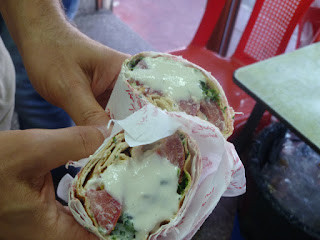 This other place dipped the cooked falafel in sesame seeds. Yum! 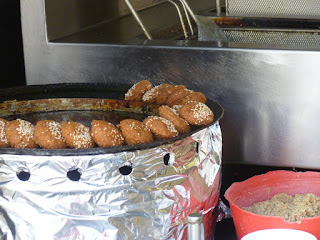 Remember how I said manaeesh wasn’t just for breakfast? We enjoyed it as a midday snack when we found a vendor making and selling some in a town square. 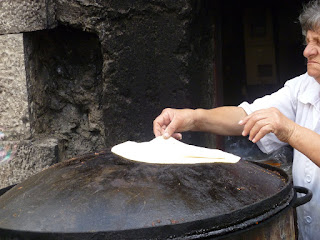 The manaeesh that have toppings get them before they go on the oven: 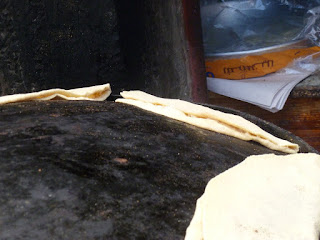 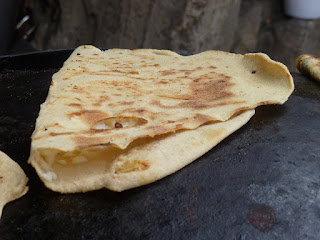 And then there was this guy, selling nuts, fruits, and sweets out of the back of his car. I’m not sure you can get any more street food than that. 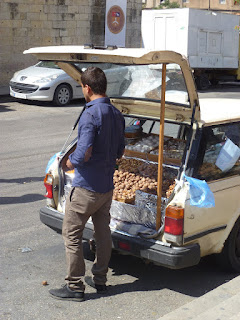 Posted by Unknown at 2:14 PM No comments:

One of my most vivid food memories of a previous visit to Lebanon was of a big Sunday lunch at my aunt’s house in Sidon. It was hot; we sat outdoors and snacked on fresh green almonds, dipped in coarse salt and washed down with ice-cold beer. Eventually the main course came out: beautiful whole fish, lightly floured and deep-fried, served with fried loaves of pita bread. The only condiments were wedges of lemon and a creamy tahini sauce. The fish was some of the best I had ever tasted; it had been swimming in the ocean mere hours ago, before being brought ashore to the city’s main wholesale fish market, where the day’s catch was auctioned to restaurants, markets, and a few savvy home cooks.

Sidon was an early stop in the trip, and my family was kind enough to indulge me in putting the fish market on the tourism agenda. I mean, we all have to eat, right? But it took some serious motivation to get ready for a 7am shopping trip while still severely jet-lagged.

The market is on Sidon’s main harbor, within sight of the famous Sea Castle. 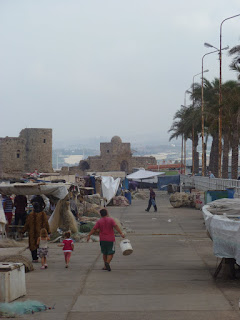 The fishermen bring in their catch from the boats docked just outside. And they keep coming all morning, from sunrise til almost noon. About every ten to twenty minutes, men would carry in crates from a different boat, a new selection of wares. 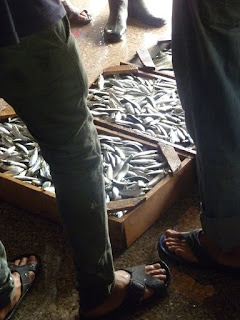 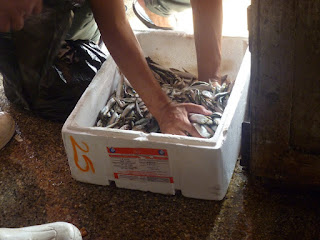 The fish were then distributed to vendors’ stations around the warehouse, where they were displayed, weighed, and auctioned off by lot. 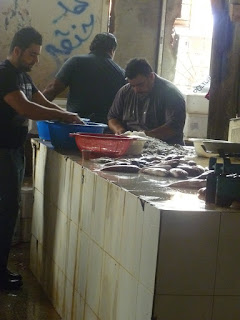 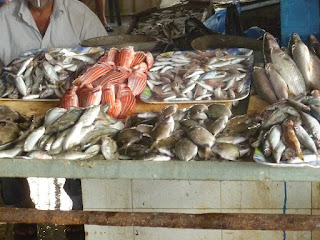 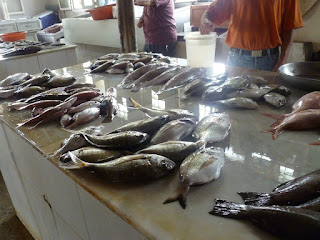 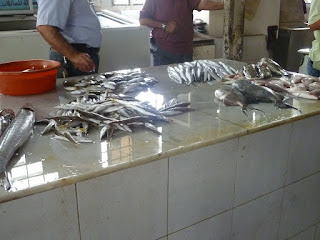 You can’t ask for a pound of one kind of fish and a pound of another; you bid by the lot. You keep an eye out for what looks good and fresh, and you might try to get a three-kilo bag of red mullet or that whole crate of soft-shell crabs. 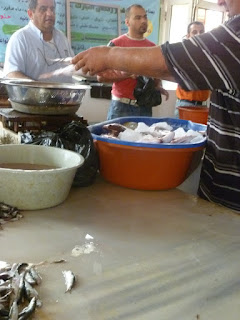 Once you’ve put in the winning bid, you could take your sea loot straight to your restaurant or your house, or else take it to the stalls on the other side of the warehouse to have your fish cleaned, scaled, and gutted. 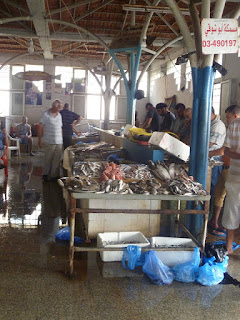 We were buying fish for lunch the next day, for 14 people. We ended up with something like 20 kilos of seafood. (Like I said, we ate heroically on this trip…) Here’s what we did with it:

Of course, you can find great seafood in restaurants, too. Like this place:

They had a simple menu, and a display of the day’s catch at the entrance from which you could choose your fish and the method of preparation (grilled, fried, etc). Really good, fresh no-frills food, and a pretty much unbeatable location.


At another restaurant that specialized in seafood, though in a less casual setting, we found some fishy takes on the classic mezze menu.  First, a version on the traditional kibbeh; typically a football-shaped treasure of ground lamb and bulgur wheat, this one was made of fish and filled with fish, and it was exceptionally good.

Another appetizer was thinly sliced salted fish roe (think of it as a Lebanese analog of Italian bottarga), topped with a sliver of raw garlic and a splash of peppery local olive oil. You have to really like strong flavors to enjoy this, but I found it delicious. 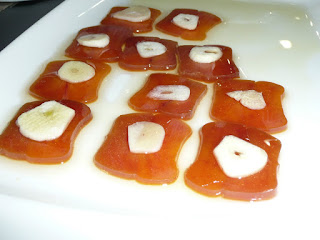 And one day I spotted this on a sushi menu. Nobody at our table ordered it, but I just might make it for myself one of these days. 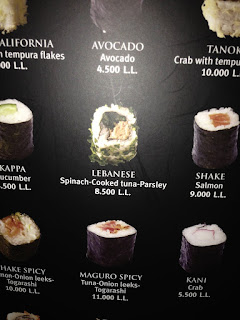 Posted by Unknown at 9:55 PM No comments: